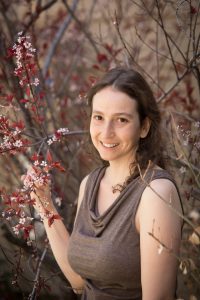 Melina wants to live in a world where everyone can sing along to every song, it’s totally fine to pause time, most landscaping is edible and massage is the standard way to end the day.

For now she finds the best way to pause time is to listen deeply and share stories.

Growing up in Chicago, by the shores of Lake Michigan, Melina wanted to be first the Karate Kid and then a diplomat. At the age of 14 she walked into a used bookstore, picked up a hardcover copy of a Carl Jung book and her spiritual journey began. Knowing she wasn’t alone in feeling something significant in  synchronicities and dreams gave her a new sense of belonging and fueled her curiosity about “what is really going on in this universe?” She is still working on that one.

By the time she graduated high school she was so intrigued by the hard-to-overstate power of ideas in human history that she signed up to study the History of Ideas at McGill. In magical Montreal Melina studied medicinal herbology, therapeutic relationships and compassionate communication in French at Flora Medicina while working at a vegan cooperatively-run restaurant that felt like an ongoing rainbow gathering. Nine years in Montreal opened Melina’s eyes to the quantity and quality of wisdom available to support us as we co-evolve consciousness and culture. Her heart opened to the joys, and necessary challenges,of seeking through relationships and community.

After herbology school, Melina felt called to devote herself more fully to spiritual practice and learn about storytelling.

This call led to a journey which included Western Sufi meditation in Florida, a year on an organic farm on the Central Coast of California and two Eurythmy schools near Mt. Shasta California and Boulder, Colorado. Eurythmy, the movement art connected with Waldorf Schools, introduced her to Waldorf Early Childhood Education and she joyfully dove into teaching and storytelling.

In Boulder, Melina joined a chavurah, aka group of friends, got a new perspective on her Jew-ishness, and met Matthew. They sang together for hours before they talked together, but once they started talking they started scheming and dreaming and simply haven’t stopped. Co-founding Mekorah together is a dream-in-progress for them.

One of their big dreams, welcoming their two children into this world- Orion in 2014 and Sephira in 2019- has already come true. Being a parent is another thing whose power is in the hard-to-overstate category.

Since becoming a mother, Melina has worked with Sounds True Publishing to design a Children’s Program for their Wake Up Festival and consulted on the storytelling curriculum for an alternative school. She has also undertaken a year-long study of mission-driven entrepreneurship with a mentor and is continually learning independently.

Melina currently teaches The Story Sharing Cycle, a four-part process she developed. It is a spiritual practice for adults who know that sharing stories, especially (but not exclusively) their own, is a necessity in fulfilling careers and life. The process can also be used to delight/educate children and inspire their own innate storytelling capacities! Melina loves to see how sharing stories transforms us.

At Mekorah, Melina steers the ship. For Melina, business is an expression of ideas in action and how to have an impact in the world. Healthy business allows for the full thriving of self and other. She is striving to walk a path of wholeheartedness and integration inspired by leaders like Brene Brown.

Melina wants the work at Mekorah to support people in their work in the world.